The Portland Region DMO partners agreed to dedicate funds in each year of the 17–19 RCTP plan to a single, significant destination development opportunity in each sub-region. This rotating investment was designated for Oregon’s Mt. Hood Territory in FY17-18 and Tualatin Valley in FY18-19.

In each case, the sponsoring DMO presented project details and the case for the project’s potential impact upon the wider region. The Portland Region DMO partners agreed as a group to invest RCTP funds in each of the projects proposed by Clackamas County Tourism & Cultural Affairs and the Washington County Visitors Association respectively. The Willamette Falls Locks project was selected for investment in FY17-18, and the Salmonberry Trail was selected in FY18-19.

This tactic is an effective way for Portland Region DMOs to work together to make large scale investments for the benefit of the region as a whole. Such projects require funding support beyond which any individual DMO can offer so the pooled resources of the region enable the DMO partners to make impactful collective investments.

Rotating the investment through each of the five sub-regions offers each DMO the chance to identify a significant project that aligns with regional goals and convey the support of regional DMO partners upon selected projects. This helps ensure that the tourism industry’s interests and priorities are represented as projects move forward.

The intent of the rotating investment opportunity is to contribute regional funds to support large-scale transformative development projects that stand to have a significant impact upon local economies and the regional visitor experience. 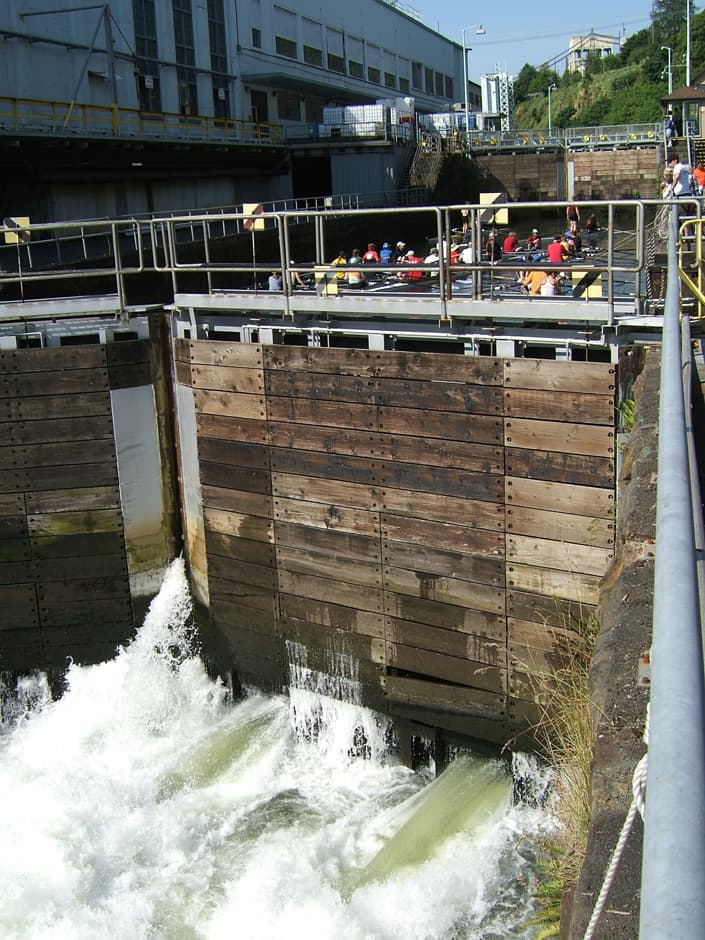 The investment in the WFLC supported the commission’s efforts to raise funds and implement a plan to acquire and reopen the locks for commercial and recreational use. The contribution of RCTP funds was a small component of a larger, two-year budget that multiple organizations contributed to, including: 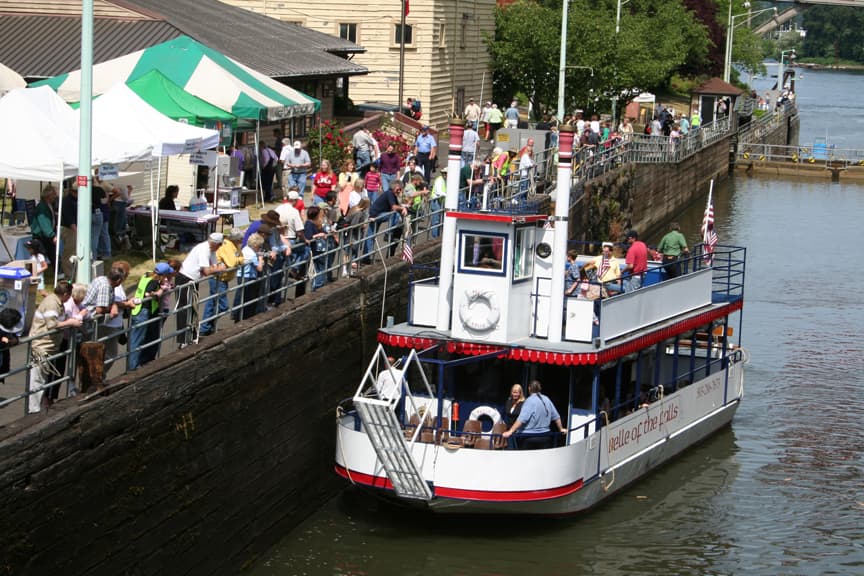 The WFLC was established by Oregon Senate Bill 256 to advise state, local and regional government agencies on the development and implementation of a plan for repair, reopening, operation and maintenance of the Willamette Falls navigation canal and locks. Governor Kate Brown proposed $7.5 million in state funding for this effort during the 2019 legislative session. While the project was not ultimately included in the legislatively approved budget for 2019-21, the commission and staff will return to Salem during the 2020 legislative session to provide further detail regarding a plan for transferring the ownership of locks from the U.S. Army Corps of Engineers and for future operation of the locks by a public corporation. Meanwhile, the U.S. Army Corps of Engineers is proceeding with repair work required to be completed prior to the disposition and transfer of the locks to a new owner. The tentative target date for completion of the construction work would be 2022.

A ribbon-cutting for the new trailhead took place on June 14th, 2019. The Salmonberry Trail Intergovernmental Agency (STIA) and the Salmonberry Trail Foundation continue their fundraising, advocacy and strategic planning work toward the development of additional segments of the 84-mile trail. 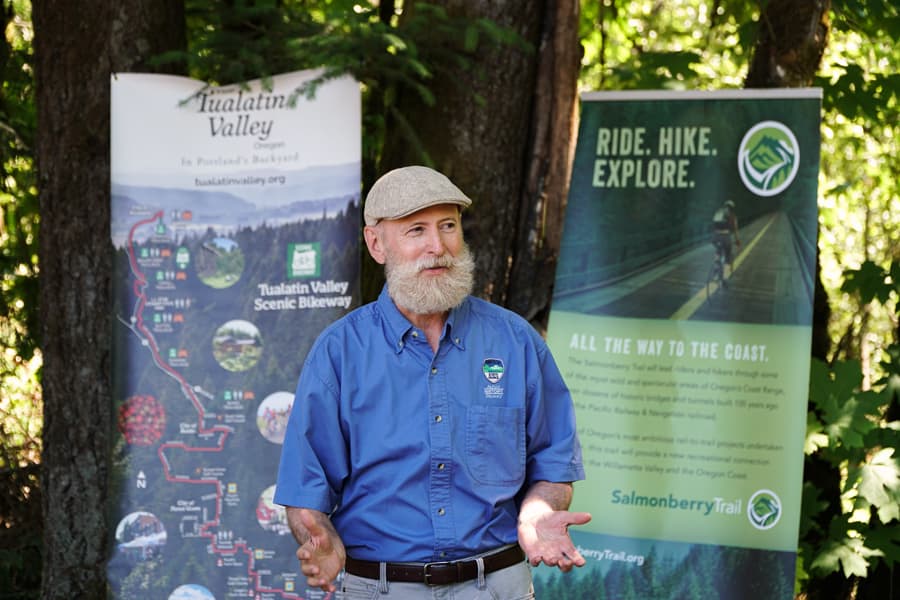 The Willamette Falls Locks Commission was able to utilize the funds for the critical planning work that was necessary for the project to be considered for possible state funding and for the ongoing work of stakeholder engagement and advocacy.

There are many moving parts and the project will continue to evolve as plans for acquisition, ongoing operation and sustainable funding come together. The completion of the expanded Manning Trailhead significantly improves the user experience for the current Banks-Vernonia trail and advances the STIA’s development and fundraising momentum.

Additionally, the expanded Manning Trailhead alleviates congestion at the Banks Trailhead which was becoming disruptive to residents and local businesses.

Projects on the scale of the Willamette Falls Locks develop slowly and evolve through many phases over time. While the funding that was hoped for was not received in 2019, the work continues and the groundwork that has been laid thus far will help advance continued planning and fundraising efforts while the locks are prepared for disposition.

The commission work that was funded in FY17-18 was completed as expected. The Portland Region DMO partners agreed in July 2017 to invest RCTP funds in the Salmonberry Trail though no specific construction project was known at that time.

The Manning Trailhead opportunity that surfaced in July 2018 was a surprise both for the Salmonberry Trail Intergovernmental Agency and the Portland Region DMO partners. The fact that the project opportunity came about when it did and that the Portland Region funds could be deployed to make it a reality was fortuitous and illustrates the value of having flexible funds available for unforeseen opportunities that come about quickly in the region.

The Salmonberry Trail project has met expectations thus far and could very well exceed them. It will take at least 12-18 months of observation to understand the true extent of the project’s impact on trail users and the residents and businesses in Banks.

The contribution to the Willamette Falls Locks Commission supported a two-year planning and fundraising initiative that continues. The Manning Trailhead expansion was completed on time and on budget thanks to the hard work of the STIA and the Salmonberry Trail Foundation to make it happen.

The Portland Region DMO partners continue to support the strategy of a single annual investment in a significant sub-regional destination development project for each year of the biennium. The Gresham Area Chamber and Visitors Center and the Columbia County Economic Team will each receive $75,000 to support destination development projects in FY19-20 and FY20-21, respectively.

The only challenge associated with this process was that it had not been done by this group of Portland Region DMO partners before and so there was no existing process to observe. Decision-making relative to the investment went smoothly, though a form for describing proposed investments and setting project goals will be implemented going forward for the sake of consistency and future reporting.